A leader in the market for engineered fluid and air equipment, Mainstream strives to make it as easy as possible to quote and install fan arrays and other HVAC components. 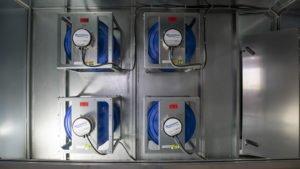 Commercial property owners are seeing the benefits of EC motor technology in order to reduce energy usage and ultimately save money. Industries ranging from high-level government facilities to healthcare centers have been following the shift to EC motor technologies.

The results of the study for the New York City Department of Sanitation concluded that energy reduction was measured to be 33.3% and 38.6% for the two replaced fan systems with no reduction in airflow.

Jim Markham, CEO at Mainstream states that a big advantage to switching to EC fan arrays is that you don’t need to completely retrofit or replace a system. Another benefit, he says, is that they pay for themselves with energy cost savings in about 2 years.

Mainstream As An Industry Leader

After working with EC fans for over a decade, Mainstream is continuously developing new ways to refine the process of designing, replacing, and installing fan arrays.

One of the best choices for retrofitting commercial and industrial air handlers is Mainstream’s IntelliCUBE EC Fan array systems. These fans require no maintenance and are quieter and more energy-efficient than belt-driven fans.

By offering quotes available in a day and quick delivery, Mainstream remains a respected industry leader.